Withdrawal reactions may occur when dosage reduction occurs for any reason. This includes purposeful tapering, but also inadvertent reduction of dose (eg, the patient forgets, the patient is admitted to a hospital). Therefore, the dosage of alprazolam tablets should be reduced or discontinued gradually (see DOSAGE AND ADMINISTRATION ). CNS Depression and Impaired Performance Ā Ā  Because of its CNS depressant effects, patients receiving alprazolam tablets should be cautioned against engaging in hazardous occupations or activities requiring complete mental alertness such as operating machinery or driving a motor vehicle. For the same reason, patients should be cautioned about the simultaneous ingestion of alcohol and other CNS depressant drugs during treatment with alprazolam tablets. Risk of Fetal Harm Ā  Benzodiazepines can potentially cause fetal harm when administered to pregnant women. If alprazolam tablets are used during pregnancy, or if the patient becomes pregnant while taking this drug, the patient should be apprised of the potential hazard to the fetus. Because of experience with other members of the benzodiazepine class, alprazolam tablets are assumed to be capable of causing an increased risk of congenital abnormalities when administered to a pregnant woman during the first trimester. Because use of these drugs is rarely a matter of urgency, their use during the first trimester should almost always be avoided. The possibility that a woman of childbearing potential may be pregnant at the time of institution of therapy should be considered. Patients should be advised that if they become pregnant during therapy or intend to become pregnant they should communicate with their physicians about the desirability of discontinuing the drug. Alprazolam Interaction with Drugs that Inhibit Metabolism via Cytochrome P4503A The initial step in alprazolam metabolism is hydroxylation catalyzed by cytochrome P450 3A (CYP3A). Drugs that inhibit this metabolic pathway may have a profound effect on the clearance of alprazolam. Consequently, alprazolam should be avoided in patients receiving very potent inhibitors of CYP3A. With drugs inhibiting CYP3A to a lesser but still significant degree, alprazolam should be used only with caution and consideration of appropriate dosage reduction. For some drugs, an interaction with alprazolam has been quantified with clinical data; for other drugs, interactions are predicted from in vitro data and/or experience with similar drugs in the same pharmacologic class. Ā The following are examples of drugs known to inhibit the metabolism of alprazolam and/or related benzodiazepines, presumably through inhibition of CYP3A.

For all users of Alprazolam Tablets To assure safe and effective use of benzodiazepines, all patients prescribed alprazolam tablets should be provided with the following guidance. 1. Advise both patients and caregivers about the risks of potentially fatal respiratory depression and sedation when alprazolam tablets is used with opioids and not to use such drugs concomitantly unless supervised by a health care provider. 2. Advise patients not to drive or operate heavy machinery until the effects of concomitant use with the opioid have been determined [see Drug Interactions]. 3. Inform your physician about any alcohol consumption and medicine you are taking now, including medication you may buy without a prescription. Alcohol should generally not be used during treatment with benzodiazepines. 4. Not recommended for use in pregnancy. Therefore, inform your physician if you are pregnant, if you are planning to have a child, or if you become pregnant while you are taking this medication. 5. Inform your physician if you are nursing. 6. Until you experience how this medication affects you, do not drive a car or operate potentially dangerous machinery, etc. 7. Do not increase the dose even if you think the medication "does not work anymore" without consulting your physician. Benzodiazepines, even when used as recommended, may produce emotional and/or physical dependence. 8. Do not stop taking this medication abruptly or decrease the dose without consulting your physician, since withdrawal symptoms can occur. Additional advice for panic disorder patients The use of alprazolam tablets at doses greater than 4 mg/day, often necessary to treat panic disorder, is accompanied by risks that you need to carefully consider. When used at doses greater than 4 mg/day, which may or may not be required for your treatment, alprazolam tablets has the potential to cause severe emotional and physical dependence in some patients and these patients may find it exceedingly difficult to terminate treatment. In two controlled trials of six to eight weeks duration where the ability of patients to discontinue medication was measured, 7 to 29% of patients treated with alprazolam tablets did not completely taper off therapy. In a controlled postmarketing discontinuation study of panic disorder patients, the patients treated with doses of alprazolam tablets greater than 4 mg/day had more difficulty tapering to zero dose than patients treated with less than 4 mg/day. In all cases, it is important that your physician help you discontinue this medication in a careful and safe manner to avoid overly extended use of alprazolam tablets. Ā  In addition, the extended use at doses greater than 4 mg/day appears to increase the incidence and severity of withdrawal reactions when alprazolam tablets are discontinued. These are generally minor but seizure can occur, especially if you reduce the dose too rapidly or discontinue the medication abruptly. Seizure can be life-threatening.

Teratogenic Effects Pregnancy Category D: (See WARNINGS section). Ā  Nonteratogenic Effects It should be considered that the child born of a mother who is receiving benzodiazepines may be at some risk for withdrawal symptoms from the drug during the postnatal period. Also, neonatal flaccidity and respiratory problems have been reported in children born of mothers who have been receiving benzodiazepines.

Benzodiazepines are known to be excreted in human milk. It should be assumed that alprazolam is as well. Chronic administration of diazepam to nursing mothers has been reported to cause their infants to become lethargic and to lose weight. As a general rule, nursing should not be undertaken by mothers who must use alprazolam tablets.

Benzodiazepines are known to be excreted in human milk. It should be assumed that alprazolam is as well. Chronic administration of diazepam to nursing mothers has been reported to cause their infants to become lethargic and to lose weight. As a general rule, nursing should not be undertaken by mothers who must use alprazolam tablets. 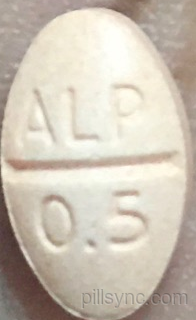 Warning: Risks From Concomitant Use With Opioids

Warning: Risks From Concomitant Use With Opioids

Risks from Concomitant Use with Opioids

Dependence and Withdrawal Reactions, Including Seizures

Status Epilepticus and its Treatment